After playing through the somewhat recycled yet still enjoyable TNA Impact: Cross the Line for PSP, we were interested to see what Southpeak Games and Double Tap could do with the Nintendo DS version. It’s a slightly different game than its PSP brethren. You’ll still wrestle with the likes of Consequences Creed, A.J. Styles, Mick Foley and others, but you’ll be using a combination of moves to beat your adversaries, while also hitting “hot spots” on your touch screen to avoid tapping out to a submission or getting pinned. 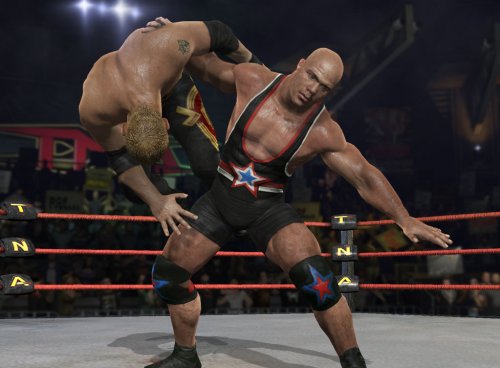 It sounds innovative, but the truth is TNA Impact’s gameplay is sloppy. Half the time, you can’t even properly hit your opponent, and you’ll end up grabbing air or launching a kick completely out of place. Yet when your opponent strikes, surprise, he manages to grab you perfectly every time – even on the easiest difficulty. What’s more, if you enter a submission or a pin, you need to switch to said touch-screen game to properly execute it. That means you’ll need to play the normal way while holding a stylus, then immediately switch to “tap screen” mode to successfully win the match. It’s real annoying, and can throw off your wrestling game real quick.

TNA Impact doesn’t give you many modes to choose from. There’s Exhibition play, where you can engage in a single match against an opponent; Victory Road, where you compete for a TNA championship; and Bound For Glory, a campaign mode of sorts where you take on the company’s finest superstars. That’s really about it. No Create-a-Wrestler, no online multiplayer…it’s all bare bones. 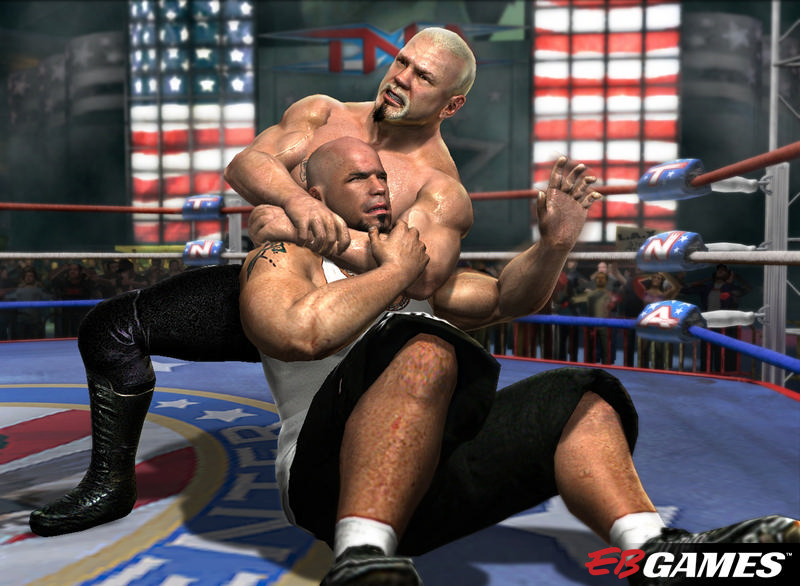 The same could easily be said about the presentation. Although we did like the video introductions for each of the wrestlers, the models themselves are less than impressive. In fact, Mick Foley is nothing more than Abyss reskinned with a wife beater shirt and weird-looking pants. Same goes for Jay Lethal and Consequences Creed. The animation is very awkward and, in some cases, glitched, as characters have a bad habit of “warping” around the ring, such as when they suddenly jump into a pin. There’s a decent roster here (including exclusive DS character Hulk Hogan), but nothing to really write home about. Worse yet, no TNA Knockouts are present. Their characters probably wouldn’t have looked so hot anyway.

Audio is sparse, too. There’s no play-by-play here, no character voices. You just hear the same usual crowds and wrestler themes, and nothing else. They’re not bad, but you expect more from a wrestling game. We’ve heard louder noises during a cricket match.

In the end, TNA Impact: Cross the Line is a dull wrestling game with very little going for it. While we like seeing Hogan in this version and appreciate the video stuff, the actual wrestling is yawn-inducing and the lack of modes totally disappoint. You’d be better off checking out the PSP edition – or better still, watching the actual wrestling show itself.

August 1, 2018 / 1987
Two years ago, before the company folded under the weight of its own bankruptcy, Midway managed to pump out a decent wrestling game with TNA

August 1, 2018 / 1080
It used to be, at one point in this industry, that folks weren’t too thrilled with portable veions of their favorite fighting games. While Capcom

August 1, 2018 / 669
Sonic & Sega All-Stars Racing is a treasure trove of classic goodness from the company’s acclaimed library, with a plethora of characters, tracks and music

August 1, 2018 / 708
Activision announced today that it is working on a game based on the hit ABC show Wipeout for both the Nintendo DS and Wii. Here