Call of Duty has been around for a long time. A good 15 years, in fact, and it’s gone from WW2-set Medal of Honor rival to the very blueprint of what it means to be ‘triple-A’ in modern gaming. For 13 of those years the series has released a new entry on an annual basis, but since 2016’s Infinite Warfare, the cracks have really started to show.

Sales have slowly declined, and what was once the most exciting FPS experience on the market has become fatigued by its own over-saturation. Traditional asymmetrical shooters are no longer the kill of the hill. Now hero shooters such as Overwatch, and Battle Royale titles such as Fortnite, wear that crown.

Last year’s Call of Duty WW2 was a fun return to the series’ roots, but in order to change CoD needs to look forward rather than back. So what has long-time developer Treyarch done to solve this problem? Copied those hero shooters and Battle Royale titles, of course.

The result is Call of Duty: Black Ops 4. A game that quite shamelessly cherry-picks the most in-vogue mechanics and features, and combines them with that instantly familiar FPS template. It’s certainly far from a original plan, but for all its mimicry, Black Ops 4 manages to give itself the shot of adrenaline it’s lacked since 2015’s Black Ops 3. 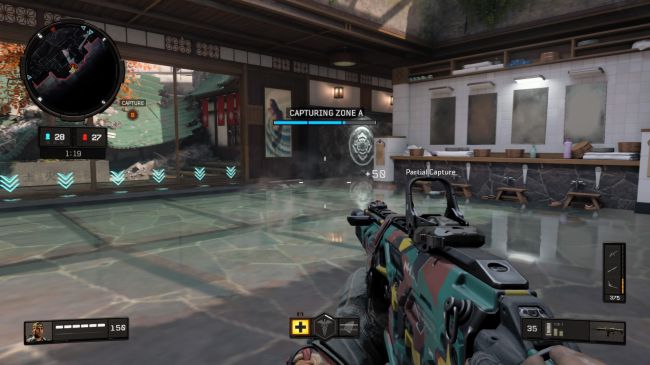 The traditional single-player campaign is the first casualty, dropped in favor of some brief ‘stories’ that introduce the game’s eight Specialists and their respective backstories. Considering that these solo modes used to be the big selling point of CoDs of old – think the heyday of Modern Warfare – you’d think its omission would be a bad thing, but Treyarch has proved time and again that deft storytelling is not its forte, so the absence of a campaign isn’t the grand loss it first appears to be.

Black Ops 4’s new three pillars are the long-running veterans Multiplayer and Zombies and newcomer Blackout, marking the series’ first entry to embrace online play across all modes. Multiplayer has received some of the biggest changes this year, weaving the familiar bombastic gunplay and some new features that aim to elicit a more tactical approach.

Health is no longer regenerative, so taking refuge behind cover and waiting for your lifeblood to return won’t do you any good here. You now have a StimPack mapped to ‘L1’/’LB’ that refills your health bar, Far Cry-style. If you’re a long-time CoD devotee, this one mechanic alone takes a while to feel natural, but its inclusion only serves to add to the flow of play rather than hindering it. Now you have to manage your health, your gear and your ammunition, forcing you to play smarter when you need to choose between healing and reloading.

The length of time it takes for your health to refill once you’ve administered a Stim Shot, and the time it takes for it to recharge, has also been slightly increased from the Beta – to stop players from abusing it. As with every new change in Multiplayer, learning to compensate for this delay fundamentally changes how you approach each systemic encounter. Every player now has their health displayed above their avatar, so you can see in real-time how much life a player has. It’s by no means a game changer, but it proves a little extra tactical information (especially if you’re playing Search & Destroy as a team).
Those aforementioned Specialists – first introduced in Black Ops 3 as an attempt to give traditional classes a little more personality – have been rejigged to create a symbiosis between their key traits and abilities. While you can still just jump in and play as whichever character you like (running, gunning and camping ad infinitum), there’s a pleasing synergy to using each operator as part of a wider team effort.

Crash can throw an Assault Pack to refill his team’s ammo supply, or use a special ability to heal everyone on the team in seconds. Prophet has a Stun Drone that will automatically incapacitate enemy players, while Recon can use a carefully placed Sensor Dart can reveal enemy positions in real time. There’s still the likes of Ruin and Battery, who are just there to cause mayhem, but the fact there’s a renewed focus on cooperation is a change Black Ops 4 benefits from tenfold. Every bullet, reload and mantle feels like the CoD you know, but it’s just different enough to shake up the minutia of play.

There are 14 maps available at launch – one of the largest selections to ship with the series – but it’s definitely a mixed bag. Being able to play some of the classic maps from Black Ops’ earlier entries is certainly a treat – Summit is still a masterpiece in level design, and Jungle will forever be the home of sneaky ambushes – but some of the best are actually new additions to the roster.

Icebreaker is easily the most enjoyable – which uses a submarine trapped in a glacier as its setting, complete with tight corridors, open areas and ice water for sneaky underwater kills – while Hacienda, Slums and Contraband are destined to cement themselves as new fan favourites thanks to how well they suit Domination and other objective based mode. 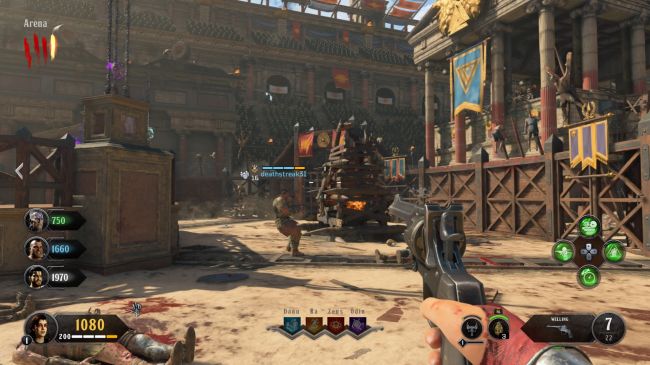 Zombies returns with its biggest launch-day haul of content yet. As much fun as its tongue-in-cheek horror action has been over the last decade or more, it’s also started to feel a little fatigued overall. This year’s entry adds in another installment in the long-running Aether storyline, but it’s in the new Chaos storyline that things really get mixed up for the better.

The two launch stories – set aboard the Titanic and a trap-filled Roman arena – are some of the craziest yet, with everything from exploding tigers to axe-flinging gladiators to battle. The addition of customizable classes and a rejig of how long it takes to revive teammates coalesce to make one of the most enjoyable iterations on the mode yet. Much like Multiplayer, it’s no grand reimaging, but a handful of adjustments in many of the right places.

Much like Multiplayer, Zombies is no grand reimagining, but a handful of adjustments in many of the right places. The voiceover, as always, is top-notch and the interplay between characters shows Treyarch has worked hard to add a new depth to its undead lore. Every map is riddled with secrets, traps, shortcuts and weapons galore. It’s brilliant fun with a bunch of strangers, but even better when you’re fending off the dead with friends.

Finally, there’s Blackout – the new Battle Royale mode that’s hoping to give the likes of Fortnite and PlayerUnknown’s Battlegrounds a run for their money. It certainly doesn’t try to hide its blatant mimicry of those elements that have made this genre so popular over the last couple of years – skydiving into a giant sandbox, looting for weapons, and fighting down to the last man or woman as the map shrinks around you – but it works because it’s using the slick production values of CoD, and integrates all the familiar ingredients you’ve come to expect from it.

The gunplay is spot-on, with the random placement of weapons forcing you to adapt your play not just to the situation you’re in, but the gun in your hands. Just found a sniper rifle but realized you’re an awful shot? Few things are going to teach you to learn to no-scope like a champ than a team of remaining survivors bearing down on your position. The map itself is incredible in scope, around twice the size of Fortnite’s iconic locale. Littered with areas that call back to classic Black Ops levels – such as NukeTown 2025 – it’s effectively a playable CoD monument.

However, the size does mean buildings are spaced out quite far apart in some sections of the map, so it can take a while to find a weapon if you’re trying to avoid other players touching down in the same area. This means there’s a far steeper learning curve for players less experienced with BR games, but with all manner of CoD elements sprinkled in for extra flavor – such as randomly placed zombies and collectable perks – there’s plenty to keep you on your toes once you learn the ropes. 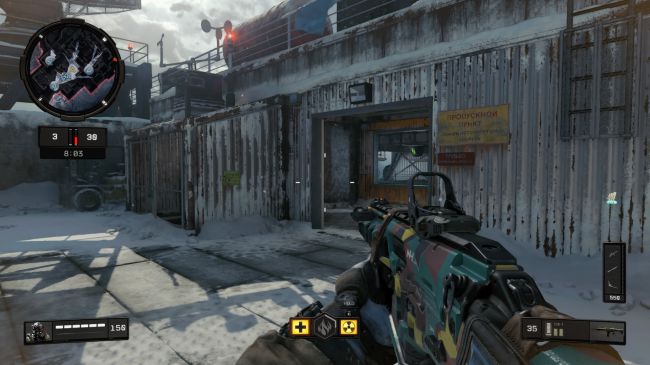 Treyarch has clearly made an effort to make its systems as user-friendly as possible, such as auto-fitting accessories to a specific weapon as soon as pick it up. Mapping health items to the same button as your Stim Shot in Multiplayer also creates a neat synergy to transition from one mode to another. Your wingsuit (the game’s equivalent of Fortnite’s glider) is also incredibly easy to control, especially when you’re leaping off a tall building for a quick escape from an ambush. There’s also support for split-screen play in Blackout, but the frame rate can take a bit of kicking when it’s in use.

Interestingly, Supply Drops seem to have been dropped entirely by Treyarch for this year’s CoD. Considering their prevalence in series since 2014’s Advanced Warfare (where players spend in-game currency or real-world money to buy packs with randomly collated skins/weapons), their absence is hard to miss. However, with the instant popularity of Blackout, it does seem likely that the studio will be adding a different microtransaction system in its place since. As to how this affects Multiplayer and Blackout remains to be seen, but they’re likely to still be only cosmetic in nature. 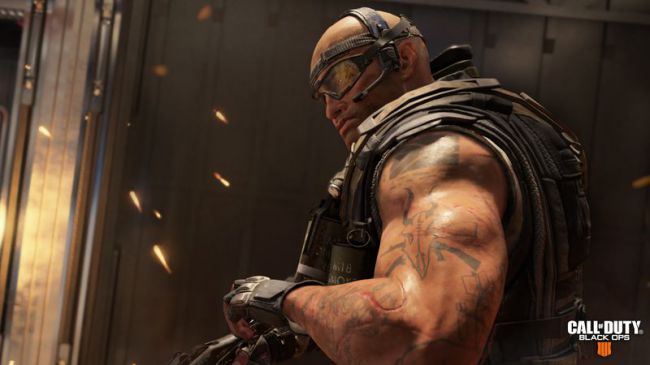 Despite the loss of a proper single-player campaign, Call of Duty: Black Ops 4 doesn’t feel like a game with a central pillar missing. In fact, the slick execution of the new Blackout mode and the key changes to Zombies and Multiplayer make this one of the most content-rich instalments in years. It’s not going to win any awards for imaginative design, but with every mode firing on all cylinders it doesn’t need to. CoD finally has its fun factor back – and about time, too.