Two years ago, before the company folded under the weight of its own bankruptcy, Midway managed to pump out a decent wrestling game with TNA Impact, based on the franchise that has since become a staple in Spike TV programming. While the game was a little over-reliant on counter moves and arcade-style controls, it wasn’t the worst wrestling game we’ve come across. (That would be WCW Nitro on the Nintendo 64, by the way.) Now, Southpeak Games has resurrected the franchise for portable play, with the PSP game TNA Impact: Cross the Line, now available both at retail and for download through the PlayStation Network. 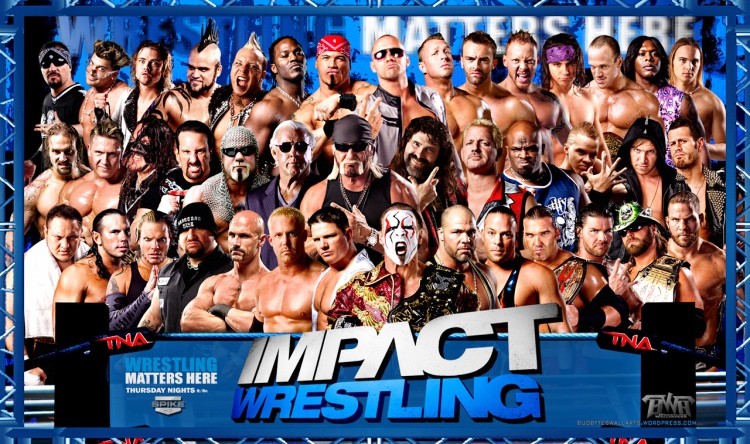 Does it still work?

The big question is, does it still work? Well, yes and no. The arcade-style controls have remained the same for the most part, with simple tap-tap controls and easy-to-execute moves, including airborne maneuvers and counters. However, those of you used to wrestling games like WWE Smackdown Vs. Raw will probably wonder where the difficulty is. This is arcade wrestling at its simplest, where you mash buttons to pull off moves, with very little style to go along with it. Younger players will like it, but seasoned pros that have mastered the art of light and heavy grabs may have to hold back some yawns.

Controls aside, TNA Impact does provide many options that fans will appreciate. Several match types are here, including Ultimate X, where you battle against competitors while trying to climb out on ropes to achieve a big plastic X hanging over the ring. We’re happy to see the return of the six-sided ring, something TNA did away with when Hulk Hogan and Eric Bischoff took over administration earlier in the year. The game’s story mode also makes a return, where you’ll work your way through the Mexican wrestling circuits, eventually becoming a key member of the TNA roster. It’s cool to earn your keep, although you’ll have to do it as a default wrestler (like the oddly-named Lenny and the even stranger Giant…Guppy?), since creating your own isn’t an option here.

If it’s competition you’re after, simply seek out a friend with another copy of Cross the Line and you can compete in a two-player match. Game sharing would’ve been a nice option to have, but at least the AdHoc play works sufficiently enough that you won’t be cursing up a storm. As in James Storm.

Still, a lot of TNA Impact seems stuck in the past, as a large chunk of the game’s content has merely been ported over from the previous release. There’s nothing entirely wrong with that, as we’re happy to see the return of the six-sided ring (something Hulk Hogan and Eric Bischoff did away with when they took over administration earlier in the year) and such familiar faces as A.J. Styles and Samoa Joe step into the ring. However, the game could’ve easily used some updating, to the point that it could’ve included Ric Flair, Rob Van Dam, Hulk Hogan and Jeff Hardy. None of them are present here, and you can’t recreate them.

Otherwise, the graphics look good (not amazing, but above-average for a wrestling game) and the ring entrances and themes will please TNA fans. For a PSP game, it does what’s needed.

If it’s portable wrestling you’re after and WWE Smackdown Vs. Raw has already been traded away, TNA Impact: Cross the Line isn’t a bad option to take. However, it would’ve been so much better with an improved roster, more match types and Game Sharing-supported multiplayer. Perhaps Southpeak will cross that Line with the next edition.