So, you’ve probably seen that we’ve been heavily covering UFC Undisputed 2010 all this week, and for good reason.  This game is looking like a monstrous follow-up to last year’s game, with a number of improvements.  To elaborate, we spoke to its producer, Neven Dravinski, at the THQ event this past weekend in Las Vegas, about what we can expect.

Now, when we reviewed UFC 2009 Undisputed over at GamePlayBook, we gave it a perfect rating of 5 out of 5.  Now you’re coming out with an even better game.  We feel a little foolish now.  How do you do it?

Neven: (laughs) Thank you.  I appreciate it.  I’ve probably said this way too much, but our team is a bunch of really competitive animals, not just within our industry, within our company, but within ourselves.  Everybody sat in a room this summer and literally thought, “How can we destroy the 2009 product, and absolutely crush what we did?”  It would’ve been easy to sit back and bask in our success, and just put out another game, but we really made every effort to improve upon things that we felt were lacking.  It’s hard to bag on your child, but things like putting in the sways – they were there last year, but they weren’t working the way we wanted them to…we had to redo the targeting and collision systems, we made the gameplay faster, we did speed-up animations, we improved upon a lot of the reactions.  That’s a huge change in gameplay, and it’s gonna revolutionize the stand-up game.  And UFC Undisputed has this very accessible gameplay to it.  It’s very easy to pick up and play.  You have these very visceral dynamic impacts that I think are synonymous with the Undisputed franchise, and the additions – like the sways – are really completely add another layer of variety and playability to the game.  The in-fighting last year was a little limited, and as a result, people started using range attacks.  We could see it online, watching people play.  We really wanted to make sure that we could add little improvements to change this up, and I think it’s still very accessible, while still adding that much more variety and depth to the gameplay. Are you ready for UFC Undisputed 2010?

We saw in the demo tonight that you were adding the much-requested Southpaw stance, as well as transitions.  It’s almost as if the gameplay is going for something more natural, rather than arcade-style of play (button-mashing, etc.), right?

Neven: Certainly.  That’s a great point.  Southpaw was certainly missing from last year, so we added it to this year’s.  “As real as it gets” wouldn’t be as real as it gets without certain fighters using that.  That was something that was considered last year but just couldn’t be implemented correctly.  It’s just one of those things.  We read comments that were made on the Internet.  It’s hard not to take things personally, when people say things like, “Oh, it’s so easy to make Southpaw.”  But that’s certainly not the case, y’know?  But we’re happy that it’s in there this time around.  As for the transition system, we talked about a unified grappling system.  We feel that that’s gonna really make the gameplay that much more accessible.  Instead of having to learn a new control scheme for the clinch position, for example, the same transitions, the same inputs you put into the ground game transfer now to the clinch position.  It was completely reanimated for UFC Undisputed 2010, as was the ground game.  We didn’t have to do that.  We did that because we wanted to.  We did that because there’s a bunch of fans out there that supported us, believed in us, and we’re out to make them even happier.

Now, what about those who don’t understand such things as a “ground game”, “clutch”, “Southpaw”?  Will they be able to get into tutorial mode and go, “Oh, so THAT’S what Southpaw is all about!”?

Neven: I think so.  I think one of the cool things that’s gonna happen this year is that since we did away with the arc types, like someone’s a boxer or a wrestler or a Muay Thai guy.  Now we’ve still got those techniques, added new techniques (karate, sambo and Greco-Roman wrestling), but we’ve taken specific moves from each of them too, you know?  As a result, fighters are much more unique, much more true to their form.  Last year we had to make a couple of tough calls, like “Well, this guy’s not really a wrestler, he does Muay Thai, but we can’t see him doing the Rubberguard.”  Now, this year, each guy has unique move sets and I think the tutorial’s gonna help.  There’s also gonna be a lot more investment in the community about learning the specifics of each of these guys, learning the combo system, etc.  That’s another huge improvement that can’t be overstated enough.  Last year we had pre-defined combos, but now you can chain any sequence together.  It’s up to you to figure out, “Well, all right, which animations take less frames, which positions, which moves will end up in a better combo for me?”  It sort of forces people to know fighting and to learn, you know, left punch/right punch combos.  The game, while still being very technical, is very easy to access.  You can still get in and bang around with your friends and knock them out.  It’s incredibly deep, and that was part of the success and longevity of the 2009 product, and I think that carries over into the 2010 one.

You’ve also made improvements to the presentation.  2009 did everything so well, and yet you’ve pushed even further for this year.

Neven: Well, again, we didn’t just sit back and bask in our success.  Every department got called back to do more, so you see lighting improvements, you see model improvements…you see all 100+ fighters are modeled with a photo-realistic technique, and that tied into the improvements to the better fighting system as a result.  Arena lighting, dynamic lighting, there’s so many things that went into this game.  We’re the most critical on ourselves.

We can see that in individual characters as well.  We see you finally got Bruce Buffer in the game (after much demand), and you even render more complicated fighters like Kimbo Slice.  That must’ve been hard as hell.

We have the UFC to thank for that.  Without them, this game couldn’t have been made.  I really can’t overstate this enough.  They have the best crew that I’ve ever worked with.  These are the same people that, in addition to putting together fights all around the world every two weeks, they’re helping us make this game, whether it’s access to their fighters, access to footage, access to their facilities, even access to Dana White himself.  You name it, I’ve never met a harder working group of people that welcomed us wholeheartedly into their organization.  I have everyone’s cell phone number in rotation, I’m calling people in the middle of the night, I’m making last minute requests.  But again, I think that adds to the realism of the game.  These people are passionate about their brand and their business, and that definitely makes its way into Undisputed.

Let’s discuss the online play.  It was a big part of UFC 2009 Undisputed.  What improvements can we expect this time around?

Neven: Online is a very important part of Undisputed.  It went through significant redesign and improvement.  You’ll see a lot of new additions, such as the camps.  We have this concept of online camps, where you’re able to create clans, train with your friends, set up your own crew, learn things, and wreak havoc on the rest of the online community with your group of fighters.  We looked at every mode and every opportunity where we could make improvements on what we already had established, and where we could introduce new things that haven’t been out there before.

We’re sure you’re pretty psyched about how well the first Undisputed sold, with over 3.5 million copies out the door, right?

Neven: It’s a very, very humbling number to hear.  There’s 3.5 million people out there, and my eternal thanks and gratitude go out to them…

Neven: (laughs) Yes, and their friends.  We do recognize that as well.  That speaks to the success of the UFC, as well as the franchise.  There’s no question that it’s the number one fighting franchise in the world.  Since THQ is the company that represents that brand, in the video game space, it’s an honor and a privilege.  The UFC is a hard working group, and they demand excellence from their brand.  Working with these great people, you really see this excellence shine through in the video game.

Well, thanks so much for your time and we’re looking forward to the game! 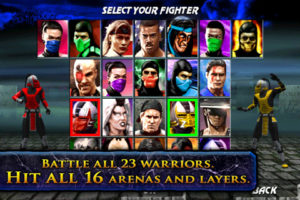 August 1, 2018 / 2037
Sometimes it’s best to just leave things be, you know? A lot of people thought Ultimate Mortal Kombat 3 was messed up enough as it