Seeing as how this is the second soccer game we’ve played at the EA Sports camp this year (following previous release 2010 FIFA World Cup), one might feel a little exhausted playing FIFA Soccer  for the first time, wondering if the team has really stirred the pot when it comes to outstanding new features. Well, in a way, it hasn’t, but instead improves upon the key components that made the series so remarkable over the years. That suits us just fine, because the game is a total blast to play – even more so than last year’s outstanding FIFA 2010. 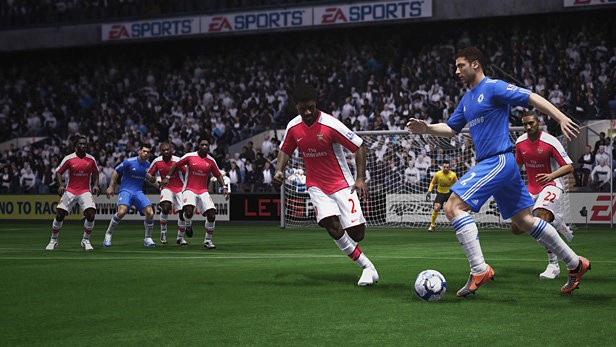 First off, there are the gameplay improvements. Shooting feels more natural this time around, thanks to the ability to power your shots or attempt to “slip one past” an unsuspecting goalie when there’s a lot of traffic around the net (unless they’re part of a top-tier team like Brazil – in that case, good luck). Fighting for the ball is also improved, as the tackles look much more natural and the opposing team shows much more aggression this time around – as do some of those aforementioned goalies. It’s never truly difficult, however, and learning the smaller aspects of the sport will make you a better player overall. Still, if you can’t quite get the hang of it, no worries. You can knock the difficulty back and even switch up to a simple two-button style of play, one for passing and one for shooting. It really is a well-rounded system overall, as there’s truly something here for everyone when it comes to gameplay.

We also like some of the small nuances in the gameplay. Weather conditions, for instance, can actually hamper a player’s performance. If you’re playing in the rain, for example, you’ll slush around on the wet ground while fighting for control of the ball. We also like the automatic player switching system, as you’ll take control of the person closest to the ball. (You can go manual too, if you prefer.) And the post-goal celebrations are a blast, both on your own and with your teammates. It never felt so good to slide across the grass.

Part of what makes gameplay work so well is the Personality Plus system. Here, you’ll need to word across a number of attributes, improving your players’ skills and becoming a better soccer team overall. You can also view how others perform, and where their key assets lie, if you’re up to studying and (maybe, if you’re lucky) beating them on the field. Soccer fans will love this feature, especially if they’re hardcore into the sport like certain Gameplaybook staffers. (Care to comment, Mr. Artest?)

We mentioned before that FIFA 11 doesn’t thrive on a heaping amount of new content, but there is some stuff here. Be a Goalkeeper gives you the chance to take control of a goalie. This won’t be everyone’s cup o’ joe, since there’s some difficulty involved in the timing. Still, it’s something that helps you improve your hand/eye coordination, and really gives you the feeling of defending a net. Also new is the Career mode, which blends together elements from Be a Pro and Manager into one huge experience. Here, you’ll take part in a huge 15-year career on the field, either as a player or a manager, and lead your team to glory – or defeat, if you suck enough. There’s a lot to balance here, so you’ll want to make sure you have time to invest in it if you so choose to take it on. But, again, EA Sports knows its fan base, and caters to them in the best way possible, with plenty of realistic options that make you feel as if you’re part of the soccer club. We’re all in with this.

FIFA 11 also has plenty of online multiplayer options. Once you activate your Online Pass, you’re a guest to many features, including ridiculously fun 11-on-11 multiplayer matches (just make sure you keep up on your end, or you’ll be chewed out) and the option to upgrade to Live Season, for a small fee. The matches are still about the same – mainly unranked matches and head-to-head competitions – but they’re great and run very smoothly, from the ones we took part in. League options are also wide open, and local play is also available, should you happen to know any soccer hooligans in the area. (And who doesn’t?)

With audio, EA Sports once again goes all out. The in-game commentary is simply superb, with the guys reacting accordingly to what’s happening on the field, right down to when someone nails a ball into the net. The soundtrack is also top-notch, featuring the likes of Gorillaz, LCD Soundsystem and more, though the real fun comes in listening to custom crowd chants in the stands. Crank your stereo for this.

And, of course, EA Sports nailed the visuals as well. Every year, the team goes all out with creating an unbelievably lifelike atmosphere for the world of soccer, and FIFA 11 doesn’t disappoint. The animations are fantastic, the replays look like they’re ready for television, the arenas are painstakingly realistic, the crowds really get into the action, and the on-field action simply couldn’t be any smoother. There are times when camera angles are questionable, but you can adjust them accordingly and get right back into the action. Just watch out for those red and yellow cards. They’re still hard to take, even in a virtual world.

Kudos to EA Sports for once again sticking with what works and giving us a soccer experience we can truly cherish. FIFA Soccer 11 is one of the best entries in the series to date, between the online options, knockout gameplay and gorgeous presentation. Yeah, more modes probably would’ve been nice, but everything else is so well done here that it doesn’t really matter. This one scores its way right into our hearts.

August 1, 2018 / 1068
Okay, so we can’t exactly call the iPad a “sports gaming machine”, but screw it, we bought one anyway and decided to dive head first