You already know how we feel about EA Sports MMA on Xbox 360 and PlayStation 3. But what about the iPhone version? Well, there are a few things to consider, such as the fact that the roster is only a fraction of what the console version offers (20 fighters compared to 60+). It also uses an entirely different control set-up, and goes for a much cheaper price. Still, does that make it worth the investment? Well, it really depends on your tolerance level. 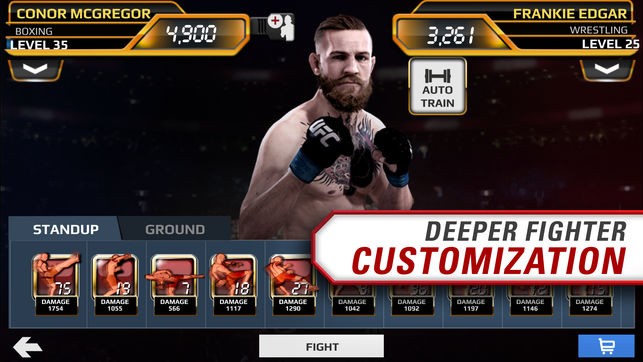 When we say the control scheme is different, boy, do we mean it. The game utilizes the touch screen to perform strikes, from pressing one of four quadrants on the screen. It’s a decent set-up, and performing grapples and other complex maneuvers is pretty easy using other touch functions on the screen. However, involving physical movement of the iPhone didn’t quite feel right. You have to actually tilt your device in order to sidestep opponents, which feels really awkward. EA probably would’ve been better off just including a virtual joystick of some sort.

Then there’s the fighting itself, which is spotty. While a lot of your moves do have impact here, there are times when collision detection is a problem, and arms and legs inexplicably blend together. It’s not horrible by any means (like previous iPhone wrestling games – we won’t even get into those), but it’s something EA should consider addressing with a patch of some sort.

If you can get a hang of the controls, there’s a lot to do here. The game features an exhibition mode, so you can get right into quick fights; a career mode, where you can build your own MMA pro and push him up the ranks to championship status; and training mini-games, where you can pump yourself up while taking part in a few joyous activities. There’s not nearly as much variety as, say, MMA 101 in the console versions, but for a five-buck title, they’re worth noting.

EA Sports MMA doesn’t sound amazing, but the sound effects are precise enough that you won’t mind plugging in your headphones when necessary. What you really should like with the presentation, though, are the visuals. While the collision detection is questionable, the fighter animation is very smooth, and the number of venues you’ll fight in, including overseas arenas, are awesome. The Retina display support is a huge plus, too.

Had EA Sports done more with a comprehensive control scheme and adding a few more fighters (still, at least Fedor Emelianenko is present), EA Sports MMA would’ve been an unbeatable sports game for on-the-go play. As it stands, it’s still worth a look out of curiosity, and five bucks is a lot easier to spend than $60 should you prefer to save your money for other things – like tickets to the next Strikeforce event.

August 1, 2018 / 1120
Okay, so we can’t exactly call the iPad a “sports gaming machine”, but screw it, we bought one anyway and decided to dive head first

August 1, 2018 / 1119
After checking out the recently released NCAA Football for both iPhone (worth checking out) and iPhone 4 (avoid like the plague unless you like incredibly