EA Sports MMA may not have been a financial juggernaut for EA Sports, but there’s no question that the game has its qualities and a worthy audience. (Plus good reviews, including ours.) But not to worry, fans, there’s more on the way.

Jeff Ecker, the game’s producer, spoke with Figure Four Daily in an interview, stating that the sequel wasn’t really a matter of “if”, but of “when”. He went on to say that the series will alternate years with Fight Night, and with Champion due for release early next year, that puts EA Sports MMA 2 somewhere in the 2012 market. 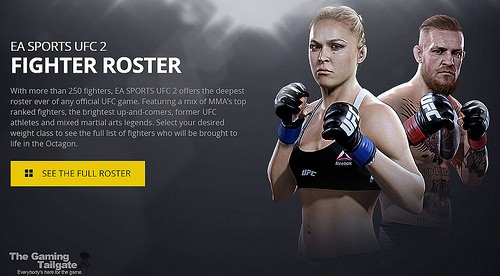 August 1, 2018 / 992
Okay, so we can’t exactly call the iPad a “sports gaming machine”, but screw it, we bought one anyway and decided to dive head first

August 1, 2018 / 1015
After checking out the recently released NCAA Football for both iPhone (worth checking out) and iPhone 4 (avoid like the plague unless you like incredibly

August 1, 2018 / 1440
There’s no question that the EA Sports Active fitness programs (they’re more than just “games”) did big business on the Wii platform. The company indicated

August 1, 2018 / 1958
Two years ago, before the company folded under the weight of its own bankruptcy, Midway managed to pump out a decent wrestling game with TNA

August 1, 2018 / 1056
It used to be, at one point in this industry, that folks weren’t too thrilled with portable veions of their favorite fighting games. While Capcom