Originally announced as an Xbox Live Arcade title that took advantage of Microsoft’s new Avatar models last year at E3, Big Park’s Kinect Joy Ride has gone through a lot since that time. It’s since been overhauled from a downloadable game to a retail title, and now makes full use of Microsoft’s multi-million dollar motion sensitive controller. While some may think the idea of playing a driving game without a steering wheel (or, God forbid, a regular controller) is a terrible one, it’s actually not that bad a ride. You’ll just need to get used to the default choices at hand, that’s all. 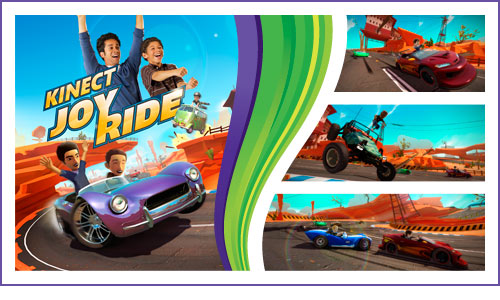 Kinect Joy Ride is a speedy little racing game for all ages, one that has you steering your vehicle by sticking your hands in front of you, gripping an invisible steering wheel, and twisting your arms as if you were taking control of your vehicle. You’ll occasionally shunt your arms forward to execute a turbo boost, lean your hips to the side to drift (one of the surprisingly fun things to do in the game) and lean your body while you’re in the air to pull off flips and spins, part of the well-founded stunt motif. That’s really about it. Most of the time, the controls work adequately enough, but there’s a real lack of complexity here. You’ll breeze through each race with barely any effort, and there’s no diversity to the cars you control. It’s odd seeing an ice cream truck handle the same way as a sports car.

Pro and Battle Races are available, both online (with up to eight players) and off-line through a single player campaign, and the unlockable extras you’ll snag along your journey aren’t half bad, including a variety of cars to stick your Avatar driver into. But the lack of any genuine challenge make this a breezy racer at best, one you’ll break out at parties to play with your family or friends. Not that there’s anything wrong with that, but when Microsoft initially announced this game, we expected a title that would take on all comers, not just relent to the Sunday driver crowd. It’s a mild disappointment, but you’ll have fun anyhow.

We’re happy to report that the online driving handles just fine, and the other offline events, including Stunt, Trick and Drift, aren’t bad either. One challenge even has you knocking down a boss statue, piece by piece, using the power of your vehicle. You can also earn bonus points by mimicking your Avatar with on-screen poses, though it’s easy to lose your driving positioning because of this. Not a big deal, since the AI doesn’t really put up much of a fight. (It’s probably better taking on human competitors in this one.)

Though it doesn’t look horrible by any means, Kinect Joy Ride is lacking in character when it comes to its presentation. It’s fun putting your Avatar in different rides, and the tracks aren’t bad, but there’s nothing really genuine here that stands out, unlike Sony’s creative ModNation Racers. The music is equally forgettable, made up of second-rate driving tunes that sound like they came straight out of an elevator speaker box.

In the end, Kinect Joy Ride needed to take more chances in order to stand out from the racing crowd, and perhaps even offer controller support for those who aren’t feeling the power of Microsoft’s motion device. Those complaints aside, what’s here isn’t half bad, and is worth taking a spin with if you’re a racing fan, old or young. It certainly beats trying to struggle with Sonic Free Riders, we’ll tell you that much.

August 1, 2018 / 1121
There’s no question that the EA Sports Active fitness programs (they’re more than just “games”) did big business on the Wii platform. The company indicated

August 1, 2018 / 924
Gran Turismo 5 is a mere three months and a week away from release. While that may be longer than some of you would like,

August 1, 2018 / 521
Sonic & Sega All-Stars Racing is a treasure trove of classic goodness from the company’s acclaimed library, with a plethora of characters, tracks and music

August 1, 2018 / 531
Activision announced today that it is working on a game based on the hit ABC show Wipeout for both the Nintendo DS and Wii. Here