We just got back from an exhausting whirlwind trip to Vegas, where the folks at Autumn Games treated us to a first look at its upcoming racing game Jimmie Johnson’s Anything With an Engine. Now, first and foremost, you shouldn’t go into this game expecting the kind of NASCAR experience that earned Johnson his five Sprint Cups. This is by no means a serious game. And you’ll realize that when we talk about the second thing — you’ll be able to race a bathtub against a dumpster. 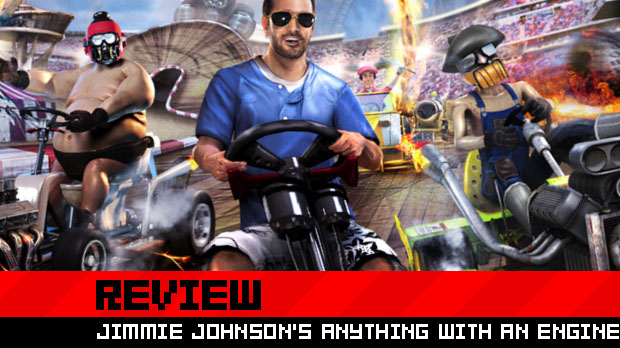 Let’s join and review Jimmy Johnson’s Anything with Engine!

A former bomb that has become “the bomb”. Gotta love it.

Anything With an Engine lives up to its name by letting you create some wacky racing vehicles to compete with. The game features a dedicated workshop mode, where you can use anything from a bathtub to a dumpster to a lawn mower (not a John Deere, but just as horsepowered) to score a first place victory. The version we checked out featured three riders, including a mower-riding madman, a bombadeer who calls himself Megaton (a hint from Capcom, perhaps?) and a race car driver called Speed Demon. More will be added in the final game, but each of these dudes have a storyline that tie in to Jimmie Johnson Racing, the in-game league.

Once you do get your vehicle of choice, it’s time to hit the road. The game will feature various tracks, but the one we saw took place on a torn-apart race track, complete with drop-off sections (don’t worry, your vehicle resets if you screw up) and environmental dangers, including rock slides, cop cars and wave walls. There are shortcuts to be discovered, along with “triggers” littered all over the road, so you can use these environmental dangers to your advantage. It may not be on the same level as, say, Split/Second, but there’s still plenty of stuff you can do to your opponents.

Like all good kart racing games, Anything With an Engine also features weapons. You can launch rockets at your opponents ahead of you, launch mile projectiles to those behind, and bumper attacks which shove off opponents in your immediate vicinity. What’s cool about these methods is that they’re personalized for each rider. The lawn mower dude, for instance, will use bags of leaves, which litter across the screen after you hit them. The Speed Demon’s oil cans are pretty devastating, too. 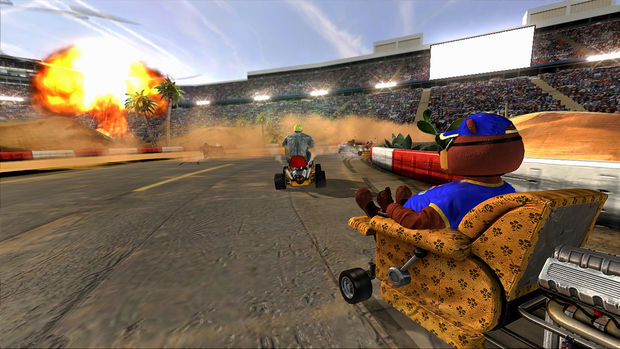 Build a car, join the race, and blow them up!

The game is being developed by Isopod Labs, which consists of former Luxoflux team members. If that developer sounds familiar, it’s because they previously worked on the Vigilante 8 games. You can definitely sense a similar vibe to that game here, with the track we played on combining the thrill of NASCAR with the wasteland motif of, say, Mad Max. For its latest downloadable effort, it’s looking pretty good. (The game is coming out for Nintendo Wii as well.)

Visually, there are a few hiccups here and there, but there’s all sorts of personality coming out of the drivers and the track. You’ll have a ball playing in the old kart-racing style as you avoid dangers and belt out some of your own. Some of the traps look ingeniously cool, including shock converters in a tunnel and fake wave walls that get in your way. We do like the fact that hitting these don’t slow you down, though you are pentalized on your racing time. (And if your vehicle takes too much damage, you will explode.)

Along with quick races and a single player campaign (which features an eventual battle with Johnson, hopefully with his famed “barstool” car), Anything With an Engine will also feature multiplayer, including local split-screen (which runs great, from the time I played the game against Johnson — yes, I played him!) and online, with up to eight folks in a race. Many modes will be introduced as well, and while we were given an idea what to expect, we can’t repeat them here. Not just yet. (Don’t worry, they won’t Bomb.)

Autumn Games is looking to make quite a push in the racing market with Jimmie Johnson’s Anything With an Engine. While it looks like another atypical kart racer, it’s got some ingenuity riding right alongside with it. We’ll see how much further it shapes up when it arrives next year. Hurry up, guys. We want to race kitchen sinks!

Look for our interview with Jimmie Johnson next week!

Tags: Anything With an Engine, Nintendo Wii, Racing Game

August 1, 2018 / 1439
There’s no question that the EA Sports Active fitness programs (they’re more than just “games”) did big business on the Wii platform. The company indicated

August 1, 2018 / 655
Sonic & Sega All-Stars Racing is a treasure trove of classic goodness from the company’s acclaimed library, with a plethora of characters, tracks and music

August 1, 2018 / 697
Activision announced today that it is working on a game based on the hit ABC show Wipeout for both the Nintendo DS and Wii. Here