Ahhh, go karting. When someone mentions putting it into a video game, you usually think of something along the lines of Mario Kart or Crash Team Racing (which we recently reviewed). But Polyphony Digital may be looking to change all that, as the company has finally confirmed at Gamescom that it will be including go karting as a supplementary mode in its upcoming racing game Gran Turismo 5, set for release worldwide in November.

Now, don’t go thinking that you’ll be able to fire off purple shells in the game or cause an opponent to slip out of control on an oil slick. This activity is based on real competitive go-kart events (and yes, they exist), so you’ll actually be behind the wheel of a model that you would find in a real racing event. You’ll sit down in one of these things and race from a lower perspective across a number of tracks throughout the world, against seven other players (either AI-driven or human).

Polyphony Digital has gone to painstaking lengths to get the realism of racing in a go-kart nailed down. The perspective is much closer to the road than with actual cars, particularly in first-person. It almost feels like you’re cruising that much closer to the street. And the handling is a little bit different than a routine vehicle, as you’ll need to watch yourself on the turns in order to avoid spinning out or running into a wall. Just because you’re in a go-kart doesn’t mean you get to abandon the rules that would normally apply to a race.

We’ve included some video footage to give you an idea how a go-kart race unfolds. As you can see, it’s looking just as sharp as the regular races, and it’s pretty easy to keep an eye on your opponents from the sine on their helmets and the movement of their go-kart vehicles. The track these guys are on look just like the same circuit-style map you would race in any other given car, be it fancy Lamborghini or NASCAR-based stock car. In other kids, this isn’t a “kiddie” race – go-kart racing is just as serious business as the other events in Gran Turismo 5. But if you’re a racing fan, you’ll have just as much fun with it, if not more.

While looking at the gameplay footage, we were quite surprised by the amount of detail Polyphony put into driver movements. If you go into a first-person perspective, you can actually see the movement of the driver’s hands as they twist the steering wheel about. In third-person, you can see them slightly leaning into turns in order to maintain a slight amount of balance. Best of all, just because you’re in a smaller vehicle doesn’t mean you won’t maintain the right amount of speed. These little suckers go fast.

We’ll have more coverage on go-kart racing in the weeks ahead, but we’re glad that Polyphony’s going in a slightly different direction with it. You may never look at kart-racing the same way again (though, honestly, nothing beats a good round of Mario Kart – it’s still a legend).

August 1, 2018 / 733
Activision announced today that it is working on a game based on the hit ABC show Wipeout for both the Nintendo DS and Wii. Here 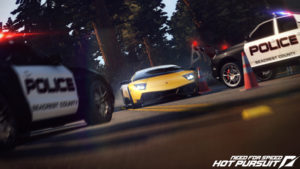 August 1, 2018 / 1372
The console version of Need For Speed: Hot Pursuit blew us away last month.  Despite the difficulty being a little bit “up there” in terms of vehicle